The exhibition of Marica Kicušić’s illustrations 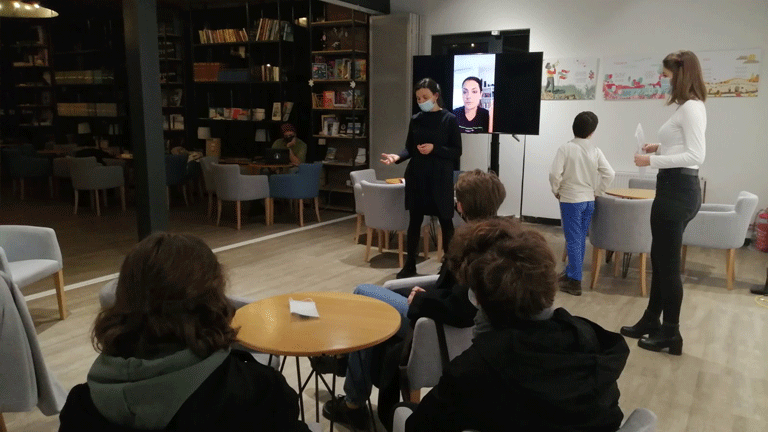 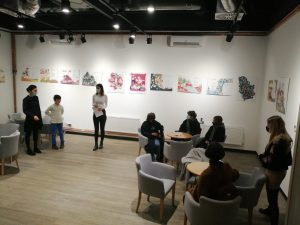 The exhibition of Marica Kicušić’s illustrations will be opened on Monday at 19 o’clock in the culture center “Svilara” within the MB fest. 15 illustrations from the book “Travels through Serbia” from the author Simon Marinkovic will be presented to the audience. This book was awarded the best children’s book at the 2017 Belgrade book fair. Here you can read the text about the exhibition written by Zoran Stefanovic, author, publisher, and international cultural activist.

Every forest is enchanted, the road is glistening and the thought is in color

About Marica Kicušić’s exhibition “A journey through Serbia”

In the future, She will be described as the mysterious daughter of East Serbia, a fairy of Central Danube. A blacksmith’s granddaughter, an undestined biologist or a veterinarian. A mountaineer, a globetrotter and a sailor. In her drawings, numbers come alive, cars have personality, and her angels, as if made of clouds, watch with maiden–like eyes.

But we today know that this is only a fragment of this especial artist’s story.

If you look deep within your memories, you’ll awaken that sensation of first time stepping into the enchanted forest. There, you followed the colorful beams of light coming from above, and you learned how to recognize magic even when you grow up and find yourself in a different setting (sometimes there’s nothing more magical than a city forests).

That very same power of recognition — understanding the true tone of hidden words — comes to power when you’re lucky enough to find yourself spiritually attached to the works of some artist, the architect of alternate realities. From then on, not only do you live in your own world, but in theirs too.

Ten years ago, if not more, when we were restoring Association of comics creators of Serbia, we could all feel the future shock, still chiming through yours truly. The strongest impression was left by the plethora of worlds, but many had a statistical anomaly that had not been present in the previous, 20th century.

Apparently, quite many ladies’ names had appeared under the wondrous artworks.

Back then, we were not aware of the fact that Serbia was becoming a European champion by the number of female comics authors in the youngest generation. And the secret lays in the fact that Serbia did not differentiate between male and female sensibility. Instead, we simply nourished Personalities to be free to express themselves. For that approach we have our artistic mothers and fathers to thank. And when it comes to public education, unrivaled is Rastko Ćirić — the heart and soul of one of the two most influential artistic departments in Serbia: of graphics at the Faculty of Applied Arts (the other, naturally, being dramaturgy and scriptwriting at the Faculty of Dramatic Arts). And Rastko’s students embellished the current reality more than any other’s students, in my humble opinion.

In that first encounter with this new artistic generation matured in the 21st century, all of us got attached to some world or another. And some drawings were signed with a name that may as well be a heroine’s name in some fairytale.

I was seeing these artworks for the first time in my life, yet I recognized them. It was as if grew up with them, as if they were created half a century ago, and not merely a day or two before… Only later did I realize that the younger generation of artist grew up with the same values as mine during the 1970’s and 1980’s. Marica’s favorite childhood books were We only miss dragons so far (Još nam samo ale fale) illustrated by Dušan Petričić, The primer is a fine book, from oh so ancient times (Baš je bukvar knjiga fina, od davnina od davnina) illustrated by Nikola Masniković, Mice and cats (Miševi i mačke) illustrated by Ida Ćirić, Dragon and the emperor’s son (Aždaja i carev sin) illustrated by Bosiljka Bosa Kićevac , as well as many books from the “Swallow” series (Lastavica), by the publisher “Veselin Masleša” in Sarajevo.

And we can say that a taste develops while you’re still a tiny being — a dwarf or a dwarfette. It does also help if you are lucky enough to have adults that will hand you absolute gems of books.

Many outstanding Serbian illustrators create at a world class level, but Marica’s color palette and delicate figures will instantly catch your eye in a bookstore — these books glow. In spite of all the sound and fury of the modern civilization, it’s easy to step onto one of Marica’s trails, to walk with her through picturesque sceneries that she has created with her brush as if she is directing a reflector on them.

The artist’s key word is travel, and she’s hardly alone in that. She’s one of the many travelers from Serbia who have created a whole new genre of comics, documenting and making comics travelogues out of their journeys, lives and adventures.

Marica is an urbanist of imaginary cities; a cartographer of mountain peaks whose oronymy was purely invented; a graphic artist of the most Japanese Japan you can imagine; a graphic diary writer from travels around the real world… Her documentary comics travelogues do not even have to be artistically elaborated, because even as sketch drawings they have an incredibly strong role of “polaroids of our thoughts and emotions” in a given time–space, says the artist.

But when the comics are artistically developed to the end, then they become real emotional travel guides, which is the real reason for this review. One of the most beloved books of this time, which introduces us to our country again — Snippets of Serbia by American Emma Fick from 2015, after which many (Belgrade) city mice became enthusiastic pilgrims in the galaxy of Serbia and the universe in the Balkans — got a worthy companion in 2017 in Simeon Marinković’s book A journey through Serbia. The book was personally and manually drawn by Marica–Passenger to be our emotional guide, a travel guide over all other guides. In this book, everything is full of art, completely documentary, from the charm of our country, its hidden order and civility, kindness and moderation, wisdom and silliness, to magic of all kinds. With good reason, this artist won not one but two main awards that very year (the other was for the book Little Love Songs by Zorica Bajin Đukanović).

Real Serbia will easily enchant you, even without drawings, but when something is interpreted and shown through the sensibility of Marica Kicušić, then it becomes a world that is a blessing for children and a safe mental refuge in this too fast times. And for adults, it is an unexpected return to the most beautiful gardens of childhood, to the days when life was at least miraculous.

One day in the future, she will be described as the Chameleon of Styles.

The Heroine of the Unexpected.

But today we know that this is only a small part of the truth about Marica Kicušić.

To assure yourself, just allow yourself to get lost in the corners of the her worlds at www.behance.net/gorgonzola.•

A special additional program of the “Multimost” Festival is the exhibition of one of the most beloved and esteemed contemporary Serbian illustrators for children — Marica Kicušić.

Marica Kicušić was born in 1988 in Negotin, Eastern Serbia. She graduated from the Faculty of Applied Arts in Belgrade, Department of Applied Graphics. She is a freelance artist and a member of national applied artists association, ULUPUDS, since 2011. Some of her areas are a combination of applied and fine arts — animation, illustration of children’s books, comics, digital and traditional graphics, digital collage, poster design, mural, drawing. She has participated in over 60 domestic and foreign exhibitions. She has received notable awards.

The exhibition presents illustrations for Simeon Marinković’s best–selling book A journey through Serbia (Putovanje kroz Srbiju), which won the Award for the most beautiful children’s book at the International Book Fair in Belgrade in 2017, when the artist also received the ULUPUDS Award for children’s illustration for the book Small Love Songs (Male ljubavne pesme) by Zorica Bajin Đukanović. Both books were published by the Kreativni centar publishing house from Belgrade.

Translated from Serbian by Angelina Stefanović